Alan Patrick was born Alan Patrick Silva Alves on July 9, 1983, in Sao Paulo. He is among the six children born to his parents. His alcoholic parents and disturbing household led him to grow up mainly in the streets. Patrick stands five feet and eleven inches tall and weighs 71 kg.

Alan started to train from a very early age. He started training with Capoeira gym. He later picked up Bazilian jiu-jitsu and moved to Rio de Janeiro to train mixed martial arts at the X-Gym. Patrick made his professional MMA debut in 2008 at Hero's The Jungle 2 against Bruno Augusto and won the match via TKO in the first round. Before making his professional debut, He fought for various promotions, including Jungle Fight and Bitetti Combat, amassing an undefeated record of 10 wins and no losses.

Alan fought in two more matches in 2008 and won all of them in the first round. After that, Patrick played in the Vision Fight for two games in 2009 and then moved to Mr. Cage in 2010. Until 2013, the fighter remained unbeaten in his professional career and won the Bitetti Combat Lightweight Championship at Bitetti Combat 15. Shortly after that, Alan made his UFC debut in October 2013 against Garett Whiteley and won the match via TKO.

In 2015, Alan lost his first professional match at the UFC Fight Night against Mairbek Taisumov. In 2016, He won two UFC matches via a Unanimous decision against Stevie Ray and Damien Brown. In 2017, Patrick took a gap year and made a good comeback 2018 against Damir Hadzovic. Unfortunately, Alan lost his last two matches in the UFC. Patrick is scheduled to face Mason Jones on June 5, 2021, at UFC Fight Night 189.

Father of a Two Children

Yes, You read that right. Alan is married to his longtime girlfriend, Launa Patrick. The love birds tied their wedding knot in the mid-2010s. They had a private wedding ceremony and have not shared much about their wedding in public. However, shortly after the wedding, the duo welcomed their first child, a son. In 2019, The family of three extended to four after the birth of their second son. 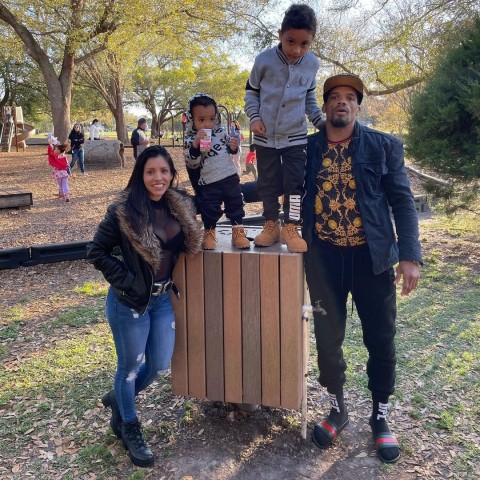 Alan along with his wife and their children SOURCE: [email protected]

Although Patrick is an active social media user and keeps sharing many of his photos in his Timeline, he has not shared much about his children and wife.

Net Worth, Earnings, and Sponsors

Alan Patrick has an estimated net worth of more than $200,000. He has accumulated most of his net worth through his successful career in the UFC. Patrick has only disclosed about $25,000 as his earing from the UFC match. The Brazilian fighter must be making a handsome amount through his sponsorship and advertising deals.