How Much Is Danilo Marques Net Worth In 2021? (UFC Career Earnings and Salary)

Earlier in his career, he competed for Predator FC, OfC, Evoke Fight, Shogun Team, Thunder Fight, CTF, LFA, and GCF, earning a good deal of money. As of 2021, his net worth is estimated at $0.2 million.

Who is Danilo Marques Married to?

Danilo Marques is married to Isabella Ribeiro Pimentel. The couple is raising their two sons: Fezao and Gael. As a matter of fact, Marques's life is an open book. The fighter almost shares every bit of his personal detail on his Instagram- Glimpse from his anniversary to his person's birthday to vacations, his IG is decorated with his beautiful family pictures. 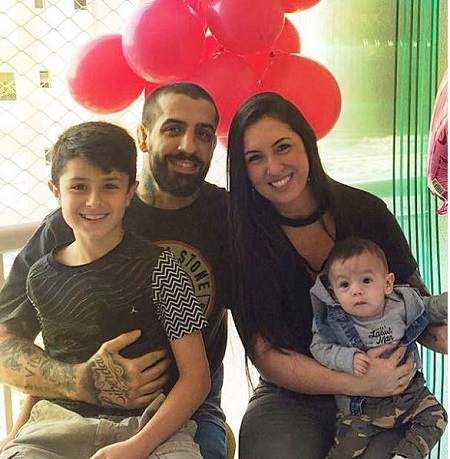 Besides, there are no news and rumors in the market about his life. Must say, Marques family is living a blissful life.

On 29th March 2014, Danilo Marques made his professional debut against Matheus de Oliveira at PFC - Predator FC 26. He won the fight via TKO in round 1. That year he had two more wins at OFC - Omega Challenger 1 and Evocke Fight - Gods Of War against Alex Junius and Glauco Florencio respectively. In 2015, he had three fights: all wins. The following year, Danilo faced his career first lost at Thunder Fight 8 - Silverio vs. Nunes against Marcio Telles.

Danilo started the 2016 season fighting against Lorival Lourenco Jr. at CTF - Curitiba Top Fight 10. He won the fight via submission in round 2. In the next fight, he lost to Myron Dennis at LfA 9 - Dennis vs. Marques on 14th April 2017. Later two months on 8th, he defeated Marck Polimeno at GCF 31 - Gladiator Combat Fight 31. On 18th February 2018, he won against Cleiton Castano at GCF 33 - Gladiator Combat Fight 33.

In 2020, Danilo signed to the UFC, making his debut at the organization on 26th September at UFC 253 - Adesanya vs. Costa where he defeated Khadis Ibragimov via unanimous decision. On 6th February 2021, he faced Mike Rodriguez at UFC Fight Night 184 - Overeem vs, Volkov. He won the fight via Technical Submission in round two.