Davey Grant, known by the ring name Dangerous is an English mixed martial artist. Currently, he competes in the Bantamweight division of the Ultimate Fighting Championship (UFC). Turned professional in 2013, he widely competed at Total Combat, Shock n Awe, and M4tC.

Darlington, County Durham native, Davey Grant was born on 18th December 1985, under the star sign Sagittarius. He holds an American nationality and is of white ethnic background. He stands 5 ft 8 in (173 cm) tall and weighs 61 kg (134 lb; 9 st 8 lb).

How Much Is Davey Grant In 2021? UFC Career Earning

Davey has earned about $200,000 from his UFC career. He fought under various promotions prior to joining UFC through which he might have earned a considerable amount. As of 2021, his net worth is approximately $1 million.

Grant is currently signed to the UFC, where the fighter has a base guaranteed money no matter they win or lose. Further, there is a win bonus for the winning fighter as well as a fight of the night and a performance of the night bonus.

Before UFC, he widely completed Total Combat, earning a decent sum of money. Outside the ring, the MMA fighter earns much from endorsements.

Davey Grant's Wife: Is He Married?

Davey Grant is married to Sherrie Grant for a long time now. The couple shares three children together: two sons and a baby girl. The MMA fighter is seen sharing his adorable family pictures here and there on his IG, where he has over 15.9k followers. 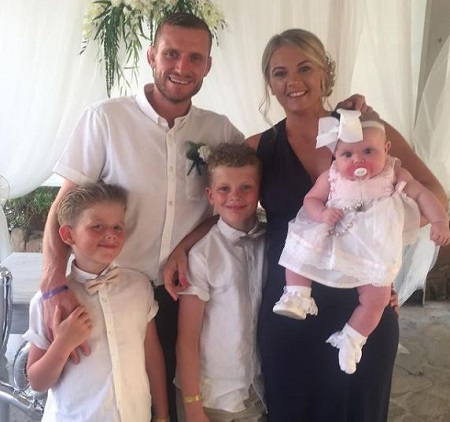 Unlike other wags, Sherrie Grant prefers to stay away from the spotlight. Additionally, she has set her IG private.

Grant, when turned fourteen started kickboxing and picked up grappling on a later date where he had his first amateur fight at the age of 15. Not only MMA, but he also played football and rugby during his teenage years. At 21, he decided to pursue MMA professionally.

In November 2008, Davey made his professional debut against Gary Conion at Goshin Ryu, winning the bout. Further, he spent four years at Total Combat.

In November 2013, he was cast in the TUF 18 The Ultimate Fighter: Team Rousey vs. Team Tate and eventually made it to the final for TUF 18 and despite the loss to Chris Holdsworth, he was signed by UFC. On 20th November 2013, he made his UFC debut at The Ultimate Fighter 18 Finale in Las Vegas against Chris Holdsworth. He lost by rear-naked choke in round two.

On 27th February 2016, Davey faced Marion Vera at UFC Fight Night: Silva vs. Bisping. The bout's result was a unanimous decision in Davey's favor. However, he loses the following two bouts against Damian Stasiak and Manny Bermudez at UFC 204 and UFC Fight Night: Shogun vs. Smith respectively.

On 9th November, he defeated Grigorii Popov via a split decision. On 12th July, he won against Martin day at UFC 251.