Don'Tale O'Neil Mayes a.k.a. Don'Tale Mayes is an American Mixed Martial Arts (MMA) Fighter who is signed to the Ultimate Fighting Championship (UFC) under the Heavyweight division. Turned pro in 2015, he made his debut from the Hardrock MMA and won the Hoosier FC Heavyweight Championship in his second bout. Besides, he has competed at RFA, VFC, V3, and LFA. He is currently ranked #58 in the worldwide ranking of the current best MMA Heavyweight fighter.

Hailing from Louisville, Kentucky, Don'Tale Mayes was born on 16th January 1992, under the star sign Capricorn. The twenty-nine years old holds an American nationality and is of Afro-American ethnic background. Regarding his physique, he stands 6 ft 6 in (1.98 m) tall and weighs 240 lb (109 kg; 17 st 2 lb).

Don'Tale Mayes is signed to the UFC where the fighter has a guaranteed amount as well as a win bonus, the fight of the night, and performance of the night.

Like other athletes, MMA fighter makes money through sponsorships and endorsements. As f 2021, his net worth is approximately $0.1 million.

Though Don'Tale Mayes is in the limelight for a long time now, he has successfully hidden his personal life from the public and mainly paparazzi to date. As a matter of fact, there is only info about his fights in the market. Additionally, he is nowhere to be found on Instagram but surfs Twitter.

The UFC fighter has always lived his private life low key. Mayes is 110% involved in his MMA career to make it every day better.

Initially, Don'tale got into martial arts to overcome his aggression, picking up Judo. Later, he also learned other disciplines. On 5th February 2016, he made his professional debut at Hardrock MMA 77, winning against Harry Hunsucker. On 4th June, in his career's 2nd fight, he won the Hooser FC Heavyweight Championship, defeating Arnold Adams.

On 9th December 2016, he faced Kenny Fredenburg at RFA 46: Johnson vs. Tucker. He lost the fight via disqualification due to an illegal elbow. The following year on 4th April he took up to Demoreo Dennis at LFA 9. The result was a unanimous decision in Mayes' favor. On 29th August 2017, he lost to Allen Crowder at Dana White's Contender Series 8. 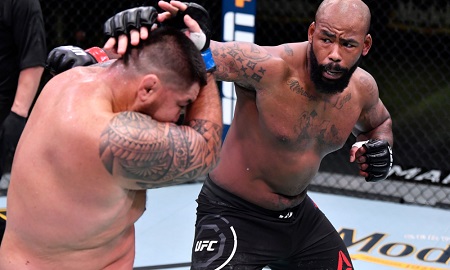 He started 2018, fighting against Mohammed Usman at VFC 60. He won the fight. Then in the following bout, he knocked out Mitchell Sipe at Dana White's Contender Series 15. He concluded the 2018 season, defeating Nikemdirim Oli at V3 Fights 71.

On 26th October 2019, Mayes made his UFC debut against Ciryl Gane at UFC Fight Night: Maia vs. Askren. He lost the bout via submission. On 16th May 2020, he faced Rodriguez Nascimento at UFC on ESPN: Overeem vs. Harris. He lost the fight via rear-naked choke submission.

On 14th November 2020, he had his UFC first win against Roque Martinez at UFC Fight Night: Felder vs. dos Anjos. Mayes was expected to faced Tai Tuivasa on 20th March 2021 but was replaced by the promotional newcomer Harry Hunsucker.