Reaching to the destination, Jesse Ellis Lingard has successfully established himself as an English professional football player who plays as an attacking midfielder and as a winger for Premier League club Manchester United and the English national team. Simply known as Jesse Lingard. He scored his first World Cup goal against Panama after getting a  return pass from Raheem Sterling in the 2018 FIFA World Cup in Russia.

The football star, Jesse has an estimated net worth of around $15 million. He earns an excellent amount of salary from his profession. Let's dig into Jesse's life and find out the secrets about his career, world cup performance, salary, net worth, and the sources of income.

Jesse Lingard began his career when he was only seven-years-old with the junior team. He signed a professional contract with Manchester United in the summer of 2011.

Lingard so far has successfully appeared 131 times, scoring 24 goals just in for the Manchester United.

Let's check out his career stats from the table given below:

Jesse Lingard was named in the 23-man England national team squad for the 2018 FIFA World Cup in Russia. Well, he appeared in the total six matches, scoring one goal against Panama after getting the return pass from his team player, Raheem Sterling. 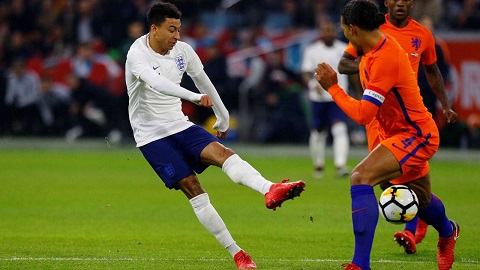 Besides, he even made an assist and even received a yellow card during the World Cup match. His overall performance in the world cup was incredible.

Jesse Lingard's Salary and Net Worth

The English football star, Jesse earns an excellent amount of money out of his football profession. Well, he receives a wage of £75000 per week which leads to paying him a huge salary of £4 million annually. He has maintained his net worth estimated to be around $15 million in accordance with his standard of living.

According to the recent reports of May 28, 2018, Jesse's current market value is considered to be €35 million.

Moreover, just like other football players, Lingard has also signed a contract with the Adidas company in 2016 and endorsed the products which enabled him to add more money to his Income source.

Looking forward to Russia with the next chapter of #NEMEZIZ! #HereToCreate #createdwithadidas