Florian Marku is an Albanian Boxer, KIckboxer, and Mixed Martial Arts (MMA) fighter. Turned professional in 2016, his record shows 11-0-1 (Win-Loss-Draw). The undefeated has won IBF International welterweight title on 25 Sep 2021 and retained it again on 2 Apr 2022.

To start: there are various factors that go into a professional boxer's earnings, such as how often they fight, various endorsement deals, and ultimately a fighter's popularity. As a matter of fact, boxing is ultimately a business and if no one is interested in your fights then there isn’t going to be much money to be made. The average earning of a pro boxer $51,370.

The undefeated, Florian Marku began boxing professionally in 2018 and has a record of 7-0-1 (Win-Loss-Draw). Though there is not much information on how much he gets per each fight, most of the fighters summons few thousand dollars. Besides, he is sponsored by ALTAR, Elite Gainz, and Pajo Construction.

Florian is engaged to his girlfriend named Eirini Konomi. Scrolling through his IG, he often posts pictures from dinners and frequented beautiful places with his fiancee, flaunting his love in public with a lot of delicacy and beautiful words. 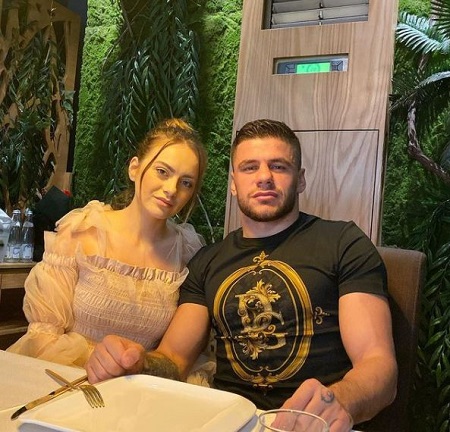 While Eirini has placed in her biography on "Instagram" the fact that she is engaged to Florian, and has received an engagement ring from him. The couple seems to be very happy together.

On 9th October 2016, Florian Marku made his professional MMA debut against Matic at GFC 7 - Greek Fighting Championship 7. He won the fight via TKO. On 23rd April 2017, he defeated Stefan Suskavcevic at MCP - MMA Challenge Pro 6. He next faced Statmatis Bitakos at Greece Regional and won the bout on 10th June 2017.

On 1st December 2018, Florian Marju made his professional boxing debut at the Best recent hall, Germany where he defeated Nikola Janicievic in the 1st round via TKO.

Next, he faced Ivan Godor at York Hall, Bethnal Green, the UK on 23rd March 2019. He won the fight via TKO in round two. That year he had four more bouts against Jan Marsalek, Tommy Broadbent, Miroslav Serban, and Nathan Bendon, winning all the fights. On 10th November 2020, he defeated Muma Mweemba at BT Sport Studio, Stratford.

When Marku was a littile boy his parents reloacted to Greece from Albania. He had with the sport of boxing in From Thessaloniki then trained and was designed by George Armagos as a kick boxer. Further, he moved to Austria in 2013 and boxed at Thaikibo in Linz .Later, he switched to MMA in 2014 and won 43 fights and lost three.

In 2014, Marku was sentenced to prison for a crime he committed two years ago. He was released after four and a half months in Austria and 13 months in Greece.