Woodlawn, Tennessee native, Jacob Kilburn was born on 28th June 1995, under the star sign Cancer. The twenty-five years old holds an American nationality and is of white ethnic background. Regarding his physique, he stands 5'9" 175.26 CM tall, and weighs 145 LBS 65.77 KG.

How Much Is Jacob Kilburn's Net Worth In 2021? UFC Career Earnings

Fews years in the MMA has earned Jacob Kilburn a decent sum of money. Currently, he is signed to the UFC where the fighters get paid a base salary on fight night. Also, there is a win bonus, fight of the night, and performance of the night bonuses.

Besides, endorsement deals help him to generate extra money outside the ring. As of 2021, his net worth is approximately $0.2 million.

Jacob Kilburn's Wife: Is He Married?

To those who don't know, Jacob  Kilburn is a married man. He tied the knot with his long-time girlfriend, Alyna Kilburn on 11th August 2018, in a secret ceremony. Later, a month he made the wedding picture public via Instagram where he wrote, "Yes....somehow she married me. Blessed beyond words!" Alyan commented, "You are the hottest guy I know and by far the hottest I've ever dated  I'm blessed. Tmi but idc." 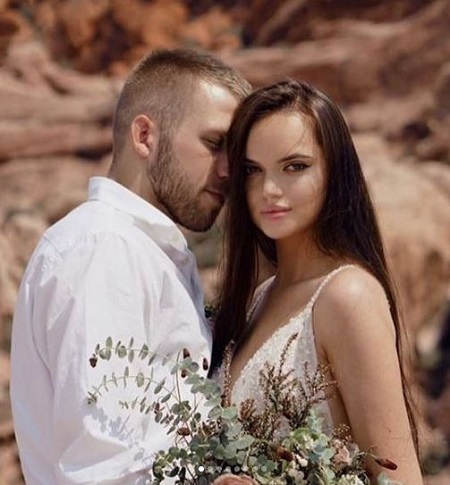 Unlike other wags, Alyna is far away from the limelight and has set her Instagram account private. On the contrary, her husband is not shy to flaunt his love life in public. Thanks to the fighter, he shares every bit of detail on IG.

Jacob Kilburn started training at the age of 10 and had a dream of becoming a world champion one day. Before pursuing a career as a pro-MMA fighter, he worked as a full-time martial arts instructor. Further, he has an associate of arts from Hopkinsville Community College.

Besides, there is no information available regarding his childhood, parents, and siblings.

On 7th December 2019, Jacob Kilburn made his UFC debut at UFC on ESPN 7 - Overseem vs. Rozenstruik where he faced Billy Quarantillo. He lost the fight via submission triangle choke in round two. In the next fight, he was defeated by Austin Lingo at UFC on ABC 1 - Holloway vs. Kattar.