Jinh Hie Yu Frey is an American mixed martial artist who is currently signed to the Ultimate Fighting Championship (UFC) under the strawweight division. A professional since 2013, she previously competed at Invicta FC where she was the former Atomweight Champion.

Arkansas, United States native, Jinh Yu Frey was born on 20th May 1985, under the star sign Taurus. The thirty-five years old holds dual nationality: Korean-American and is of Asian ethnic background. Regarding her physique, she stands 5 ft 2 in (1.57 m) tall and weighs 105 lb (48 kg; 7.5 st).

To date, Frey has overal 14 pro matches, resulting 9 wins and 5 losses. Extensively, she has competed at Invicta FC, where the top fighter makes $5000 to show and other $5000 if they win.

Currently, she is signed to the UFC where the fighter gets paid a base salary on fight night no matter if they win or lose. Also, there is a “win bonus”, “fight of the night” and “performance of the night” bonuses which are usually an extra $50,000.

Moreover, she is sponosred by Onnit and Premium Jane CBD. As of 2020, her net worth is approximately $0.1 million.

As of 2020, this year will be the 8th year wedding anniversary of Jinh Yu Frey and her husband, Douglas Frey, also a MMA fighter. The couple started dating in 2008. Intially, Douglas was hitting on Jinh's sister because of he kind of assumed that she wasn’t single. Later on, the duo caught up and went on a date. After a couple of drinks, they were a little bit more friendly and that's the point where things started. In 2012, the duo tied the knot. 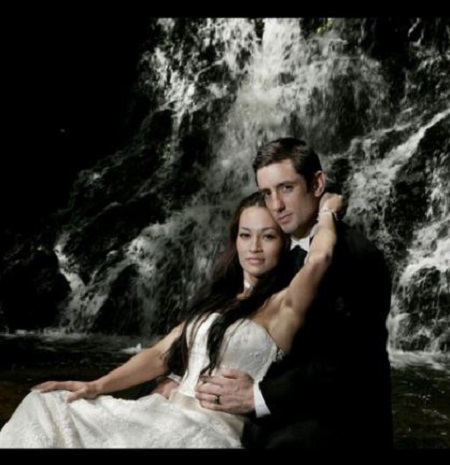 In an interview, Jinh Yu said, "I like to travel. My husband and I are avid travelers. We save up money all year long and pick a place and go backpacking. We typically try to do one extreme physical challenge usually while we are there. We will try to climb a glacier or do some crazy long trek."

Frey graduated Palo Duro High School in 3 Years with a Distinguished Achievement Diploma in the top 2% of her class. Then she received her A.A.S. in Nuclear Medicine from Amarillo College. Next, she enrolled at Midwestern State University earning a B.S. in Radiologic Sciences, and finally, attended the University of Texas at Arlington for her Masters in August 2015.

Her mother is an American whereas her father was Korean who died when she was young. She has one older brother, two younger half brothers, and one younger half-sister.

On 27th June 2020, Frey made his UFC career debut at UfC on ESPN: Poirier vs. Hooker where he faced Kay Hansen. She lost the bout via submission in the third round. For now, she is scheduled to face Loma Lookboonmee on 4th October 2020 at UFC on ESPN: Holm vs. Aldana.