Julian Marquez well-known American professional mixed martial artist. He has been fighting in the Middleweight division in the Ultimate Fighting Championship. Julian previously trained with the Syndicate MMA team and has changed to Glory MMA since 2020. Marquez is nicknamed The Cuban Missile Crisis. He is also Blue Belt in Brazilian Jiu-Jitsu.

Julian Marquez was born on May 8, 1990, in Kansas City, Missouri. He was born to Fernando Marquez and his wife, Shannon Marquez. He also has an elder brother named Antonio Miguel Marquez. Marquez holds an American nationality and is of Cuban descent as his father immigrated from Cuba to the States in his early days.

Like other MMA and UFC fighters, Julian is also very much private about his personal life. He has made career earnings of more than $200,000 from UFC and MMA matches. Julian has an estimated net worth of more than $200,000. He is ranked among the best middleweight fighters in the UFC. 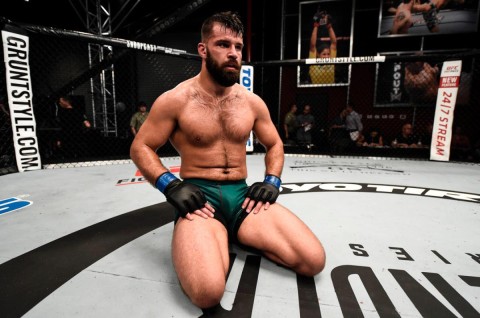 Julian Marquez rests in the ring after winning the match SOURCE: MMA Junkie

As per sources, Marquez has earned $161,000 from his UFC career. Also, He must be taking a reasonable amount from his sponsors and advertising deals.

Like most of the UFC and MMA fighters, Julian has successfully kept his personal life away from the public. Although he is an active social media user, he rarely posts about his relationship status. As per sources, Marquez is single as of early 2021. In 2020, he posted a video where he mentioned that he was single and married to his games.

Julain is living a happy life. He likes to spend his free time training and exploring new places. Marquez is very close to his family. In early 2021, Julian and Miley Cyrus had some fun on social media, which made headlines in the entertainment industry to some extent.

Career In UFC and MMA

Marquez started training for the MMA in the early 2010s but turned professional in May 2014. He made his professional debut against Charles Rooks and won the match within 53 seconds via TKO. It took him more than a year for this second match, and he won the match via TKO.

In 2016, Julian fought in the Bellator 150 against Chris Harris, where he lost his first professional game. In October 2016, Marquez made his Light Heavyweight debut at Combate Americas: Empire Rising against Matt Hamill. In 2017, The fighter made his UFC debut against Phil Hawes in Dana White Contender Series 4 at the Middleweight division.

At the end of 2017, Julian fought against Darren Stewart and won the match via Submission. He also won the Fight of the Night award for the game. In 2018, He lost his first UFC match against Alessio Di Chirico via Split Decision. Marquez was fined 30% of his fight purse to Di Chirco, and the bout proceeded at a catchweight. The fighter also suffered a fully torn latissimus dors, which kept him from fighting for two years.

In 2021, Julian made his comeback against Maki Pitolo and won the match. As per sources, Marquez is set to face Sam Alvey in April 2021 at the UFC on ABC 2.