How Much Is Kyle Daukaus' Net Worth In 2021? (UFC Earnings and Paycheck)

Fighters at UFC have a guaranteed amount no matter they win a loss. What matters is bonuses: there is a win bonus for winning fighters, the fight of the night, and the performance of the fight bonus which is usually $50,000 who perform excellently.

Among others, Kyle is sponsored by G Fuel and Bodybuilding. As of 2021, his net worth is approximately $0.2 million.

Who is Kyle Daukaus' Girlfriend?

UFC middleweight fighter, Kyle is neither married nor single. He is in a long-term relationship with his cute little girlfriend, Katharine Reppert. This April 2021, the couple will be celebrating their nine years of togetherness. Every year on their anniversary they share adorable pictures of them. They are not shy to flaunt their love in public. 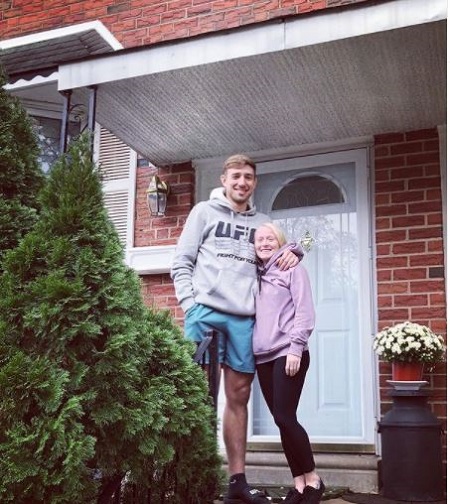 Kyle Daukaus and his girlfriend standing in front of their new home SOURCE: Instagram @kyle_daukaus

In October 2020, the couple purchased their first home in Philadelphia, Pennsylvania.

On 18th February 2017, Kyle Daukaus made his professional debut at AFT 53 against Dino. He won the fight via submission. He next faced Kyle Walker at KOTC - Regular and won the bout again via submission via Brabo choke followed by one more win against Tyler Bayers.

He started 2018, fighting against Elijah Gbollie at AOW 5 - Art of War Cage Fighting 5. He won the fight via submission. The following night, he defeated Dusting Long at ROC 66 via submission.

The following year on 16th February 2019, he defeated Jonavin Webb at CFFC 72 - Brady vs. Abdul-Hakim via Technical submission. On 25th June 2019, he appeared on Dana White's Contender Series - Season 3, Episode 2 against Michael Lombardo. The fight was a unanimous decision in Kyle's favor. The years' last fight was against Stephen Regman at CFFC 78 on 21st September 2019. He won the fight via submission.

On 1st February 2020, he faced Nolan Norwood at CFFC 81, where he defeated via submission.

In June 2020, Kyle signed to the UFC, making his debut on 27th June at UFC on ESPN 12 - Poirier vs. Hooker where he had his career's first loss against Brendan Allen. On 21st November 2020, he won against Dustin Stoltzfus at UFC 255 - Figueiredo vs. Perez via unanimous decision.

Kyle is scheduled to face Aliaskhab Khizriev at UFC on ABC 2 on 10th April 2021.