Konklak Suphisara a.k.a. Loma Lookboonmee is a Thai mixed martial artist who is currently signed to the Ultimate Fighting Championship, being the first Thai fighter to sign with the organization. Also, she is a Muay Thai, boxing, and kickboxing under the names Kanda Por Muangpetch and Kanda Kokietgym.

Buriram, Thailand native, Loma Lookboonmee was born on 18th January 1996, under the star sign Capricorn. The twenty-four years holds a Thai nationality and is of Asian ethnic background.

How Much Is Loma Lookboonmee's Net Worth In 2020? 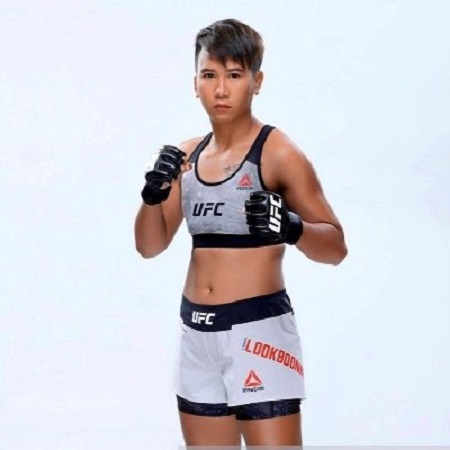 According to the source, the average UFC fighter makes $138,250 per annum. Managed by Ruby Sports & Entertainment, Loma is sponsored by various brands. As of 2020, her net worth is under review.

Loma Lookboonemee is single as of now. Rather than being in a romantic relationship, she is much focused on her MMA career. Additionally, there is no information regarding her past affairs or boyfriend.

Lookboonmee started training Muay Thai at seven years old at her father Boonmee Suphisara's gym. Intially, her father's gym was nothing: no ring, no roof, not even a bag. Instead, she trained in the dirt. And it was there on her family's farm in Buriram that she learned the art of eight limbs.

She traveled the countryside through the rough trails of temple fairs and festival fights looking for matchups. It didn’t take long before she ran out of opponents and began fighting boys.

On 13th January 2018, Loma Lookboonme made his professional MMA career debut at Invicta FC 27: Kaufman vs. Kianzad where he faced Mwllissa Wang. He won the fight via unanimous decision. He next faced Hana Date at Pancrase 298 on 5th August 2018. He won the fight via TKO. On 3rd November 2018, she was defeated by Suwana Boonsorn at Full Metal Dojo 16: Big Trouble in Little Bangkok.

On 26th October 2019, Loma made her UFC debut at UFC Fight Night: Maia vs. Askren where she defeated Aleksandra Albu via split decision. On 23rd February 2020, she faced Angela Hill at ufC Fight Night: Felder vs. Hooker. She lost the fight via unanimous decision. For now, Loma is scheduled to fight against Jin Yu Frey on 4th October 2020 at UfC on ESPN: Holm vs. Aldana.