Luana Pinheiro is a very talented Mixed Martial Arts (MMA) fighter who has been amassing a lot of fame for her fighting style. In her nine pro-MMA bouts, she has managed to win eight of them, losing only one. Currently, she is signed with the Ultimate Fighting Championship (UFC) under its Women's Strawweight Division.

Born in 1993, Luana Pinheiro celebrates her birthday on the 18th of November every year. She hails from the suburbs of Joao Pessoa, Paraiba, Brazil. Likewise, her zodiac sign is Scorpio.

As for her family life, the MMA fighter likes to keep those details up to herself only. Due to her secrecy, little to none is known about her parents and siblings. Other than that, it is known that she stands at the height of 5 feet 4 inches (1.63 meters).

The Brazilian MMA fighter directly started her career as a professional fighter. On October 9, 2016, she competed in her debut pro-MMA bout and defeated Thatiane Araujo. Just a month, she recorded her second win when she defeated Jessica Rodrigues.

On March 19, 2017, Pinheiro faced the first defeat of her career when she faced Cris Macfer. She lost the bout via a split decision. Following that, she trained harder and went on to be defeatless. She began to defeat every opponent that she faced and never crossed faces with defeat.

The winning streak started when she won against Charlene de Souza, and it continued as she went on to defeat the likes of Jessica Rodrigues, Elaine Leal, Yasmeli Araque, Helen Harper, and Stephanie Frausto. On March 27, 2021, she signed a contract with the Ultimate Fighting Championship (UFC).

Her first match in the UFC was against Randa Markos, but Markos was removed from the match due to COVID-19 protocols. After the match was canceled, it got rescheduled. Now, Pinheiro will face Randa Markos in her UFC debut on May 1, 2021.

How Much Is Her Net Worth?

The Joao Pessoa native MMA fighter has been associated with different MMA brands in her career, including UFC. Thus, Luana Pinheiro must have been paid well by those former and current MMA brands. Likewise, she is also seen promoting/endorsing brands as well as going on some long vacations.

Considering all those, it might not amaze people if her net worth is around some millions. So, how much is her exact net worth? Sadly, the numbers are still under review, due to which nothing can be said about her net worth. Nonetheless, as per some sources, it is known that the average salary of an MMA fighter in the UFC is around $138,250.

Is Pinheiro Single or Married?

Luana Pinheiro is yet to share the wedding vows and get settled with her loved one. But, that doesn't mean she is not seeing anyone as the UFC fighter is in a romantic relationship with a man named Matheus Nicolau. 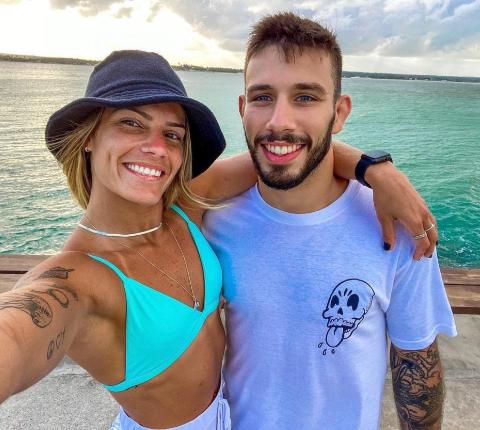 The two have been dating each other for a long time now. Together, they are usually seen going on vacations and enjoying their time. Their romantic relationship can also be witnessed through their respective Instagram handles, where they often flaunt pictures with each other.