Luis Pena is a well-known American professional mixed martial artist. He has been fighting in the Ultimate Fighting Championship under the Lightweight division. Luis competed on the Ultimate Fighter-Undefeated season 27. Pena started his professional career in 2016. Luis currently fights with the American Top Team. He is also a blue belt holds in Brazilian Jiu-Jitsu.

Luis Pena was born Luis Antonio Pena on July 5, 1993, in Naples, Italy. He is the biological child born to his parents. His mother was in the Navy and raised in Arkansas primarily by his adopted mother, Rose, and stepfather David Dunbar. Pena's adopted father, Luis Pena Sr., divorced Rose when Luis was three years old. Pena stands six feet and three inches tall and weighs 70 kgs ( 155 lb).

Luis started his wrestling career at Little Rock Central High School, becoming a well-known wrestler. Pena made his professional MMA debut in September 2016 against Chris Petty. He won the match via a KO in the very first round. In his first two years, He fought in four MMA matches and will all of them. At the end of 2017, The fighter won the vacant VF lightweight championship title against Damir Ferhatbegovic.

In July 2018, Luis made his UFC debut against Richie Smullen and won the match via submission(guillotine choke). Shortly after that, in November, Pena fought against Michael Trizano and lost his first professional game. In early March 2019, The fighter made his featherweight debut against Steven Peterson and won the match. In the very next match, He fought back for the lightweight.

In 2020, Pena fought in two UFC matches, in which he won one of them and lost another. He won against Steve Garcia and lost against Khama Worth. Shortly after the game, He tested positive for marijuana. Luis is scheduled to face Alexander Munoz on April 17, 2021, at UFC on ESPN 22. 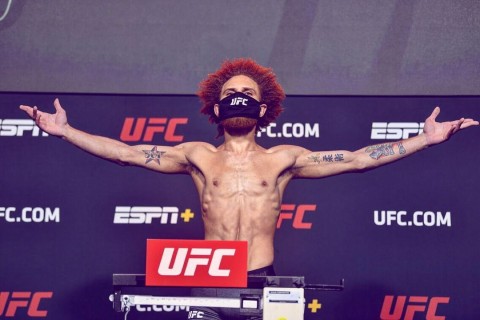 As per sources, Pena has earned $250,000 from his UFC matches but has only disclosed about $145,000 earnings from fighting. As a UFC fighter, He must be making a reasonable sum from his sponsors, bonus amount, pay-per-view, and few more income sources.

Who is Luis Pena Dating? Know About His Girlfriend and His Relationship Status

Luis likes to keeps his personal life away from the media. He is yet to share a word about his relationship status. Following his posts on social media, It seems like Luis is single as of early 2021 but could be secretly dating someone. So, Pena's relationship status is a mystery to most of us.