Makhmud Muradov is an Uzbekistan-born MMA fighter who currently competes in the middleweight division of the Ultimate Fighting Championship. He competed in several MMA promotions in the Czech Republic and made his UFC debut in September 2019. His current MMA record is 24-6-0.

Who is Makhmud Muradov scheduled to fight next? How much does he earn per fight from the UFC? Is he married? Read the article till the end to know everything about the MMA fighter.

Makhmud Muradov is a newcomer in the UFC and has fought only two fights to date. He was scheduled to fight four times in 2020 but the bouts were canceled due to various reasons. Muradov has earned thousands of dollars from his MMA career fighting in different companies. With two fights in UFC, he also earned a huge paycheck. His net worth in 2022 is reported to be in 6-digit figures.

Makhmud is a very low profile about his family background and marital status. The fighter is living a happy life along with his partner Monika Bagarova. The love birds have been together since 2019. Muradov is a proud father of a daughter. He has not shared a word about his daughter's biological mother. Makhmud has successfully kept his personal life away from the spotlight. 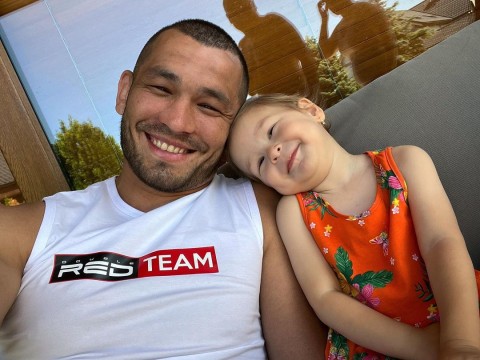 Makhmud shares a photo with his daughter SOURCE: [email protected]_muradov

Makhmud keeps sharing photos of his training and family on his social media platforms.

Makhmud started training in the early days and made his MMA debut in September 2015. The fighter remained in several leagues for several years and held a 22–6 MMA record and won multiple regional middleweight championships. In early 2019, He made his UFC debut and has fought in four matches and won three of them.

You can discover a wide range of gossip, sports news, and love affairs on Playerswiki.