Mateusz Gamrot, "Gamer" is a Polish professional Mixed Martial Arts (MMA) fighter who is currently signed to the Ultimate Fighting Championship (UFC) under the lightweight division. Turned professional in 2012, he previously competed at Night of Champions (XFS), KSW, Cage Warriors Fighting Championship (CWFC), and KSW. He is currently ranked #61 in the Current Best MMA Lightweight Fighter.

How Much Is Mateusz Gamrot's Net Worth In 2021? UFC Career Earning

Currently, he is sponsored by Under Armour, Catering dietetyczny, Endorfina, Diet&Sport, Swanson Polska, and Essenz. As of 2021, his net worth is $0.1 million.

Mateusz is a married man and shares two children: a son and a daughter with his wife. The MMA fighter has maintained his personal life low key. There is very little information available regarding his personal life. Unlike other wags, Mateusz's spouse remains out of the spotlight. 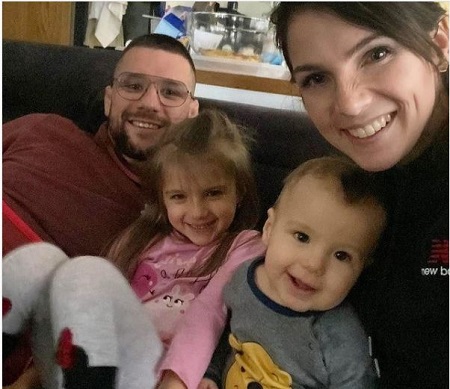 However, on Instagram, Mateusz shares some of his pictures with his wife and children. Via his IG, it came to know that, their second child, a son was born in April 2020.

On 4th February 2012, Mateusz Gamrot made his professional debut at XFS - Night of Champions 3 where he defeated Arbi Shamaev via TKO in round two. That year, he had two more fights against Tomasz Matuszewski and Tomas Deak in XFS on 21st April and 20th October respectively. He won both the fights.

In 2013, he joined KSW, making his promotional debut at KSW 23 - Khalidov vs. Manhoef where Mateusz Zawadzki lost to him via TKO. He next defeated Andre Winner at KSW 24 - Clash of the Giants by unanimous decision, followed by Jefferson George also via unanimous decision.

In 2015, he had two fights: winning against Rodrigo Cavalheiro and Marie Piraev at KSW 30 - Genesis and KSW 32 - Road to Wembley. The following year, he faced Mansour Barnaoui and Renato Gomes at KSW 35 - Khalidov vs. Karaoglu and KSW 39 - Colosseum, winning both the bout.

In 2017, he had only one fight against Norman Parke at KSW 39 - Colosseum. He won the fina via unanimous decision.

On 11th July 2020, he faced Norman Parke for the second fight at KSW 53 - Reborn, winning this time too. On 29th August 2020, he faced Marian Ziolkowski at KSW 54 - gamrot vs. Ziolkowski. The fight was a unanimous decision in Mateusz's favor.

In 2020, Mateusz signed to the UFC, making his debut at UFC Fight Night 180 - Ortega vs. Korean Zombie against Guram Kutateladze. There he faced his career's first loss via split decision. On 10th April 2021, he is scheduled to face Scott Holtzman at UFC on ABC 2.