Matthew Christopher Schnell a.k.a. Matt Schnell is an American Mixed Martial Arts (MMA) fighter who is signed to the Ultimate Fighting Championship (UFC) under the flyweight division. He is ranked #9 in the UFC flyweight rankings as of 9th November 2020. Turned professional in 2009, he previously competed at Caged, GFA, Summit FC, and mostly Legacy FC from where he made professional debut as well as was the former flyweight champion.

Amory, Mississippi native, Matt Schnell was born on 15th January 1990, under the star sign Capricorn. The thirty-one years old holds an American nationality and is of white ethnic background. Regarding his physique, he stands 5 ft 8 in (1.73 m) tall and weighs 125 lb (57 kg; 8 st 13 lb).

How Much Is Matthew Christopher Schnell's Net Worth? UFC Career Earning & Purse Money

Fighting for UFC, Matthew Christopher's pay in the organization has been gradually increasing. His UFC career earnings are listed below down the table.

Before signing to the UFC, he competed extensively for Legacy FC where the athlete makes a $1000 to $2000 purse fight. Outside the ring, Matt earns much from the sponsorship deal. As of 2021, his net worth is over $0.5 million.

On 14th April 2018, Matt tied the knot with his long-time girlfriend, Morgan Schnell in a simple but elegant wedding ceremony in Huston, Texas. It's been over two years still the MMA fighters keep on sharing a glimpse of their wedding on his official IG. What's more, he often shares pictures of his beautiful wifey while he is far due to fights telling how much he misses her. Must say, he is not shy to flaunt his love in the public.

In November 2019, Matt surprised his fan followers with news of their baby on the way. He shared a picture of a ultrasound photo and wrote, "My baby is 28 weeks along today. She’s about the size of a small eggplant, and growing rapidly. She’s currently checking in just a little over 2lbs. She had her hands up high (unlike her daddy) so we weren’t able to get a clear shot of her sweet face. Shout out to Penelope’s momma for being a stone-cold fox!" 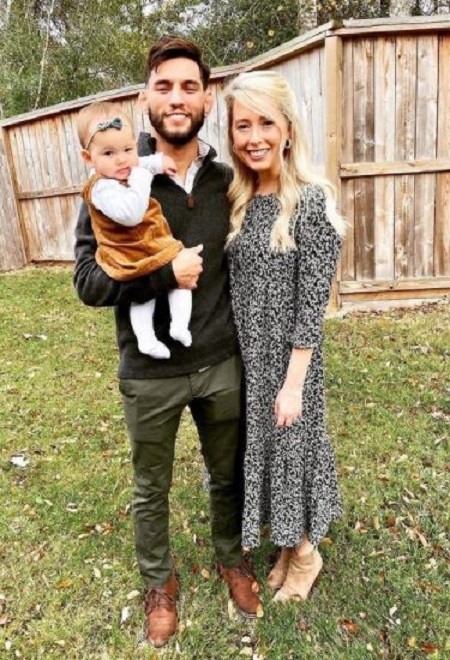 On 20th January 2020, Matt is scheduled to face Tyson Nam at UFC on ESPN: Chiesa vs. Magny. Originally, the duo was expected to face each other on 12th September 2020 at UFC Fight Night 183.

Nevertheless, Schnell was withdrawn from the fight on the day of the event's weigh-in for health issues related to his weight cut. Again, the bout with Nam was first rescheduled to UFC Fight Night: Thompson vs. Neal, on December 19, 2020,