Modestas Bukauskas is a Lithuanian Mixed Martial Arts fighter who is currently signed to the Ultimate Fighting Championship under the Kight Heavyweight division. Currently, he is ranked #41 Best MMA Light Heavyweight Fighter Worldwide.

How Much Is Modestas Bukauskas' Net Worth In 2020?

Modestas is currently signed to the UFC, where the fighter gets paid a base salary on fight night no matter if they win or lose, however, there is typically a “win bonus” involved for the winning fighter, “fight of the night” and “performance of the night” bonuses.

Besides, he is sponsored by CBD Sport and Fitness Nutrition, Mauler MMA, FighterShopUk Peterborough, and DISTINCT PHYSIO. As of 2020, his net worth is approximately $0.3 million.

Neither married nor single, Modestas Bukauskas is currently in a healthy relationship with his girlfriend, Sacha Jade Lowe. The couple has just started dating and is yet to come out with their love story: when did they meet - who approached first. 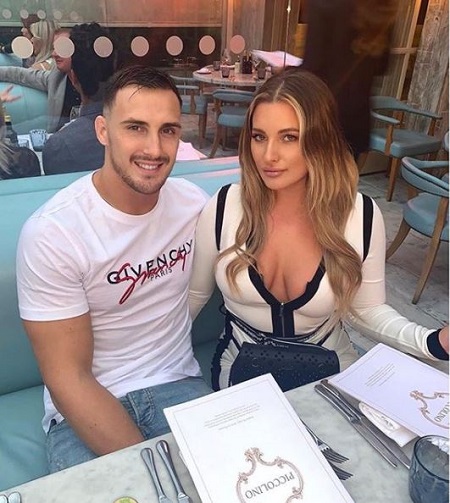 Matter of fact, this is Bujasuskas' first relationship which got disclosed in the media.

Born in Klaipeda, Lithuania, Modestas moved to London, England when he was three. His father was ex-Soviet Union no holds barred heavyweight champion. Modestas said, his father passed on fighting knowledge to hi. He had been training in kickboxing since he was a kid under his father, Gintas.

He took a break when he reached twelve and played some basketball, and wound up in the United States to finish up his high school hoops career. At 18, he was at a crossroads with no college scholarships on the horizon, so his father advised him to go back home and begin his mixed martial arts career.

In his second UFC fight, he lost to Jimmy Crute at UFC Fight Night 180 - Ortega vs Koran Zombie.

Modestas said, "To be in the UFC has always been my dream since I started fighting. It’s also been my dream to become classed as the best in the world in something, and I have the power to do that now fighting in the biggest organization in the world. "