How Much Is Mounir Lazzez's Net Worth In 2022? UFC Career Earning & Prize Money

As of 2022, Mounir Lazzez's net worth is approximately $0.2 million. Fighters at the UFC have a base salary on fight night no matter if they win or lose and further have a win bonus for the winning fighter and fight of the night and performance of the night.

Earlier he extensively competed in Dubai, earning a good deal of money. Further, he is sponsored by My Protein and My Six Pak.

On 8th May 2012, Mounir Lazzez made his professional debut at Dubai FC: 2 Fight Night, where he won the fight via punch in round one. He remains undefeated compiling a 7-0 record until he was defeated by Eldar Eldarov at Brave CF 23 on 19th April 2019 via unanimous decision.

Mounir Lazzez's Wife: Is He Married

Mounir Lazzez is married to his long-time girlfriend, Valeria Paoletti. The coupled tied the knot on 14th January 2015. Every year Mr. and Mrs. Lazzez share pictures on the occasion of their anniversary with such a lovely caption. The spark in the relationship is still as bright and full of love as it was in the beginning. 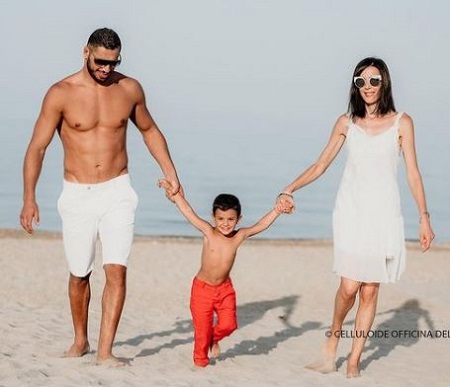 Later two years on 15th August 2017, the couple welcomed their first child, a son to the world. The family of three is living a blissful life. The couple often features their son on their respective IG.

Lazzez worked hard from a tender age. He started to train in mixed martial arts as a youngster because he was bullied. He still visits his family in Tunisia on a regular basis and cites their influence for giving him the inspiration to achieve what he has done in his life. He later moved to Montreal, Canada, allowing him to continue to develop his elite skills before finally settling in Dubai.