Muslim Salikhov is a well-known Russian Mixed Martial Artist. The multi-talented fighter is also a Sanda Fighter and competes in the Welterweight division. Muslim fights in the Ultimate Fighting Championship and is a multiple-time Wushu Sanda world champion. In addition, he is one of only two non-Chinese athletes to have won the Wushu Sanda King's Cup.

Muslim Salikhov was born Muslim Magomedovich Salikhov on June 9, 1984, in Makhachkala, Degestan ASSR. He did not come from a reputed family so, much information about his early life and his parents is still under the radar. Salikhov stands five feet and eleven inches tall and weighs 77 kg.

Muslim started fighting from a very early age. He started his career in China and was the Sanshou champion at the 2004 European Wushu Championships. The following year, Salikhov became the World Champion. Salikhov is often acknowledged as one of the best Wushu Sanda competitors in history. In 2006, The UFC fighter won the King of Sanda title and became the first non-Chinese to win.

Salikhov made his professional MMA debut in 2011 against Wang Hong Tao and won the match via TKO at the Top of the Forbidden City 2. In 2013, He made his welterweight debut against Filip Kotarlic and won the game via KO. Until 2015, Muslim fought in eight professional matches and lost just one match. In 2016, He moved to Catchweight and played in the division until 2017. In November 2017, Salikhov signed with the UFC, debuted against Alex Garcia, and lost the match.

In 2018, Salikhov fought in one UFC match and won the game. In 2019, Muslim won the UFC 242 match against Nordine Taleb and also won the Performance of the Night prize money. He played his last game in July 2020 against Elizue Zaleski dos Santos. Salikhov is scheduled to face Francisco Trinaldo on June 5, 2021, at UFC Fight Night 189. 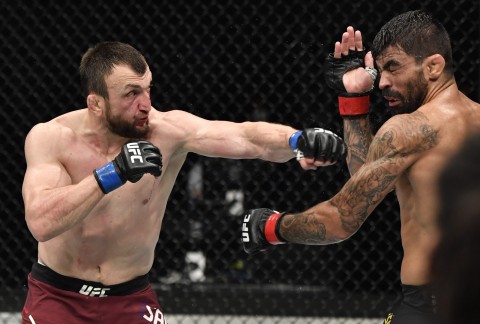 Muslim punches his opponent in a UFC match SOURCE: The MMA Scene

In 2019, Muslim earned $77,500 from his match against Taleb. In addition, he made $50,00 as the Performance of the Night Bonus and the remaining amount as a guaranteed amount, win bonus, and incentives.

Muslim is very much active social media user. His timeline is filled with photos of his games and training. There is no rumor of him dating anyone to date. He is very much early in his career and must be focusing on making a promising career.  Salikhov must be waiting for the right time to start his love life.