Gossip How Rich is soccer player Odion Ighalo? What is his Net Worth? Know his Awards, Property, & Career

How Rich is soccer player Odion Ighalo? What is his Net Worth? Know his Awards, Property, & Career

Football and goals, everyone loves it. Today we are talking about Nigerian professional footballer Odion Ighalo who has scored 99 career goals and 4 national goals till date and is considered as one of the highest paid footballers of Nigeria. The 28-year-old striker currently plays for Chinese Club  Changchun Yatai in Chinese Super League and also for the Nigerian National team which qualified for the 2018 FIFA World Cup.

Along with his 12 years of professional career, Odion is successful to earn the estimated net worth of $20 million. Besides his prominent career, Odion also enjoys happy married with Sonia Ighalo and shares 3 children.

Well, then how much salary this successful footballer earns? Let's know all about Odion's salary, career earnings and net worth in this section.

Odion's net worth seems to be rising all these years and as of 2017, it was reported to be around $20 million. Though Odion Ighalo's net worth of 2018 is under review, with his current annual salary of nearly $14 million, it is estimated to rise by 50% to $30 million. Wow!

Probably, you are also keenly interested to know about his career earnings too, right? Scroll down.

Initially, in his professional career, Ighalo used to play for his country club Prime (2005-2006) and Julius Berger(2006-2007). With his fierce performance, he was discovered by FIFA and played for Norway's team, Lyn. After playing for a season till 2008, Odion Ighalo was signed by Udinese with a 5-year deal on July 30, 2008.

Even if the deal amount of the contract is not out, but it is revealed that Odion's transfer fee from Lyn to Udinese was $2.33 million with his market value being $2.45 million.

Sadly, the salary of Odion Ighalo in Udinese is not revealed but while in Udinese, he was often loaned out to other teams like Granada, Cesena, and Watford. But later, Watford signed Odion Ighalo on a permanent deal on October 24,  2014, after Udinese released him from his contract with a transfer fee of $9.83 million while his market value was $2.45 million.

While Odion Ighalo played for Watford till 2016, he earned the weekly wage of $36,883 summing up the annual salary of  $1.9 million. He was also the third highest earning player in Watford behind Mario Suarez and captain Troy Deeney who received the weekly wage of £45,000 and £35,000.

Later he was signed by Chinese club Changchun Yatai. 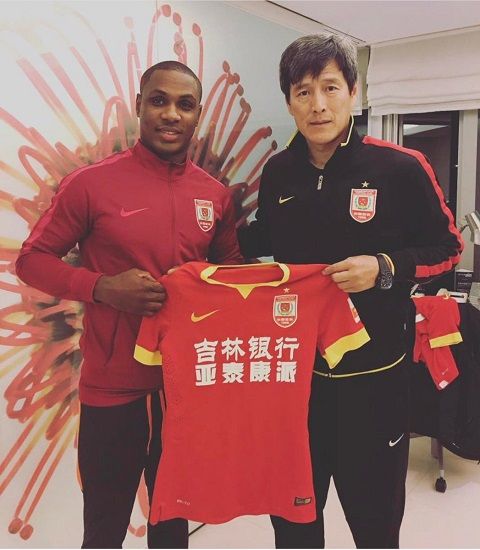 Odion officially signed with Changchun Yatai on January 31, 2017, with the deal worth $27.93 million. At the time of transfer, Odion's market value was reported to be $14.75 million, however, his current market value as of December 2017 is $11 million.

In the 2017 season, Odion earned the weekly wage of $265382, his annual salary being $13.79 million. Actually, Odion wanted to play in the English league, where football star Wayne Rooney earns an annual salary $16 million and has $145 million net worth, but no news of his transfer in recent in out yet.

Well, Odion besides being in the limelight has not exposed much about his properties. So, the detail of his house is not out yet. Probably, his house costs millions of dollars. And talking about his cars, Odion owned an imported car from England, but it was vandalized by thieves. The actual worth of the car is not out yet.

And talking about his endorsements, Odion signed a deal with Multichoice Nigeria and currently is the brand ambassador for it. Though, the deal amount is not revealed.

Alongside being a successful footballer, Odion is also a generous footballer. He often dedicates part of his wages to the Nigerian charitable organizations to help impoverished children, schools, and widow below the poverty line.

Back in February 2017, Odion who earns millions of salary revealed that he was going to open an orphanage home in Nigeria for the upliftment of their life. Odion also shared the photo of the unfinished building on Instagram. Have a look.

All thanks to God for the work so far??

Career Achievements and Awards of Odion

As we have known, Odion who played in local clubs in Nigeria got to play in Italian and Spanish and currently plays in Chinese team. Odion has played in 8 teams so far which includes Prime, Julius Berger, Lyn, Udinese, Granada, Cesena, Watford and Changchun Yatai.

And talking about his International career, Odion Ighalo was selected in Nigerian squad by Nigeria interim coach Daniel Amokachi, on March 24, 2015.  He was named in Nigeria's squad for the 2016 Olympic tournament in Brazil. Odion also played in the 2018 FIFA World Cup qualifiers match against Cameroon, winning by 4-0.

In his 12 years career, Odion has scored the total of 99 career goals, and in h4-0is other 5 International goals. Let's have a look at some of his goals.

However, Odion has not won any career awards yet but has won an award for his charity. Furthermore, he has earned the hearts of millions with his gameplay and generosity.

We wish Odion best for further and stay tuned for more updates!