Ranked at #25 as the current Best MMA Lightweight Fighter, Rafael Fiziev is a rising  Azerbaijani-Kyrgyzstani mixed martial artist. Rafael has been fighting under Ultimate Fighting Championship and trains with Phuleo Top Team. He is also a blue belt in Brazilian Jiu-Jitsu.

Rafael Fiziev was born on March 5, 1993, in Bishkek, Kyrgyzstan.  Fiziev rose to fame only after his successful career, so information about his early life is not shared with the media. Rafael started boxing at an early age. His father introduced him to boxing. There is not much information about his education and academic career.

Net Worth and UFC Paycheck

Rafael Fiziev has an estimated net worth of more than $ 100,000. He has accumulated most of his net worth through his career in UFC and MMA Fighting. The UFC Fighter is also a former police officer and must have earned some amount through his career. He has been competing in MMA since 2015 and has been with UFC since 2019. 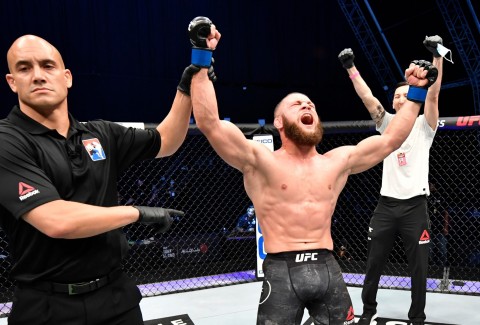 Rafael after winning a fight at UFC SOURCE: UFC Squad

Social Media has become a very useful site for information. Fiziev is a active social media user. He keeps posting photos of his training and his travels. Following his posts on his social media account, it seems like Rafael is living a happy single life.

Rafael started his career after his father bought him a pair of boxing gloves. He fought with his cousin and lost the match. To overcome his insult, He started working hard and took it as a professional career. Rafael used to get bullied and had to change school. He went on to take Muay Thai for being bullied.

Fiziev started training for Muay Thai and got involved in several other combat sports like sambo, boxing, Jiu-Jitsu, and wrestling. He had initially started his career as a boxer so, Switching to MMA was very much hard for him. He has been involved in almost four dozens kickboxing matches. Fiziev has won thirty-nine and lost eight games in total.

The Jiu-Jitsu fighter made his UFC debut on April 20, 2019, at UFC Fight Night 149. He fought against Magomed Mustafaev and eventually lost his debut match by first-round technical knockout. Soon after that, he had his second match against Marc Diakiese. he won the match via unanimous decision. In early 2020, Fiziev signed a new four-year contract with UFC.

In December 2020, Rafael won his fourth UFC match against Renato Moicano via knockout in the first round. Before this, he was a MMA fighter and made his debut in 2015. He fought with American promoter Titan FC and Asian promoters like ROAD FC.