Ricardo Ramos is a rising Brazilian Mixed Martial Artist. He is currently fighting in the Ultimate Fighting Championship under the Featherweight division. Ramos turned professional in 2012 and made his UFC debut in 2017. The fighter is also a black belt holder in Brazilian Jiu-Jitsu. He currently competes under Ramos Team from Brazil.

Ricardo Ramos was born Ricardo Lucas Ramos on August 1, 1995, in Campinas, Sao Paolo, Brazil. He currently holds Brazilian nationality. There is not much information shared about his early life and his educational qualification. Ramos stands five feet and nine inches tall and weighs 66 kg (145 lb).

How Rich is Ricardo Ramos? Know About His Earnings, Net Worth

Ricardo Ramos has an estimated net worth of more than $300,000. Ramos has been fighting for almost a decade, and a fighter earns a good amount from his fights. A UFC fighter has multiple income sources, including his sponsorship and advertising deals, bonus amounts, incentives, pay-pay-view, and a few more. As per UFC officials, He has made $276,000 from his UFC matches. 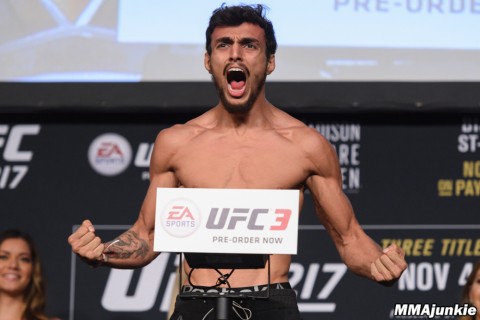 Like other UFC fighters, Ramos is very much private about his economic career. He has only shared the amount of $103,000 as his earnings from the UFC fight. The average salary of a UFC fighter is more than $60,000 annually.

Ramos started training from a very early age but made his professional MMA debut at seventeen in 2012. He fought against Josivaldo Moreno and won the match via Submission(triangle choke). In his third match, Ricardo won the EFC Bantamweight Championship title against Allan Nascimento.

Ricardo fought in both bantamweight and featherweight, regularly switching from time to time. In February 2016, He lost his first professional fight against Manny Vazquez. This was a title match for the vacant Legacy FC Bantamweight Championship. In February 2017, Ramos made his UFC debut against Michinori Tanaka and won the match via unanimous decision.

In November 2018, Ricardo fought in the UFC 217 against Aiemann Zahabi and won the match. He took home the prize money for Fight of the Night. In 2019, The fighter fought in three matches, out of which he won two matches and lost one. In mid-2020, Ramos fought against Lerone Murphy and lost the game via TKO.

In his professional career, Ricardo has won fourteen games and lost three. Ramos was scheduled to face Bill Algeo on April 17, 2021, at UFC on ESPN 22 but has withdrawn his name from the list after testing positive for the COVID.

Ricardo Ramos, 25, does not like to share much about his personal life with the media. He has become successful in keeping his relationship and private matter away from the public. Ramos is at the peak of his career and could be focusing on his career rather than spending time with people. He is very much close to his family and spends his free time with his friends.