Sara Calaway, also famous as the ex-wife of WWE superstar The Undertaker, is an American professional wrestling valet and a one-time wrestler. She was a valet for The Undertaker in 2001 and 2002 in the WWE.

Sara made her first appearance in the WWF in series of footage shot by a stalker, the first being played May 28, 2001, on Raw. Further, Sara ended her longtime marital relationship with Mark Calaway popular as The Undertaker, in 2007. Has she married again? Who is she dating?

Sara Calaway is a former professional WWF wrestler. She might have made some earnings during her short stint at WWE however, her net worth and salary are under review and we will update as soon as the news hit the market.

Sara's ex-husband Mark has a heavy net worth of $17 million. Mark is engaged in wrestling since the past 36 years. He reportedly earned $2.5 million annually as his salary as a full-time wrestler but currently has a five-year, part-time contract with the WWE, and he makes $2.25 million per year.

Sara Calway's Personal Life; Is She dating someone?

Sara Calway has not been part of any other relationship that we know of. Earlier she was married to WWE legend Mark Calaway popular as The Undertaker. The couple tied the knot on July 21, 2000. However, they ended their married relation in 2007. 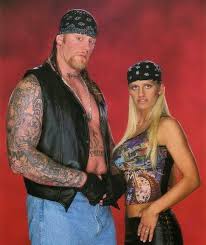 Sara and Mark together have two daughters, Chasey who was born in November 2002 and Gracie who was born in May 2005. Further, she doesn't have any boyfriends currently after being divorced from her husband.

There are no rumor or controversies regarding Sara but her ex-husband was involved in many relationships. The Undertaker has been 3 relationships in total and he has 4 children. The Undertaker's first son Gunner was born in 1993, to his first wife Jodi Lynn and is now almost 24 years old.

He married Jodi in 1989 and divorced her after a decade long relationship in 1999.

The Undertaker's fourth child was born a few years ago, back in 2012, and is the only child he has had with current wife Michelle McCool. Further, there was a rumor that undertaker began dating his third wife Michell when he was in a relationship with Sara. However, this fact is not confirmed yet. The couple tied the knot in 2010 and are living a happy married life. Besides, he was linked with different other women in the past.

Sara Calway was born on November 2, 1970, as Sara Chirie Frank in  Long Beach, California, USA. further details regarding her early life are not available.

Sara Calway started her career as former WWF wrestler and also American professional wrestling valet. She rises to fame because she is the ex-wife of The Undertaker.

She appeared in a storyline because Diamond Dallas Page stalked her in order to provoke the Undertaker. Diamond showed some videos in which he had covertly filmed Sara without her knowledge. This happened in 2001.

One year later, in 2002, she appeared in UPN special WWF Divas: Sex on the Beach and on September 12, 2002, episode of SmackDown!. In 2003 she appeared along with her husband in the WWE published book, WWE Unscripted.