Tai Tuivasa is a well-known Australian Mixed Martial Artist. He has been fighting in the Ultimate Fighting Championship in the Heavyweight division. Tai has been fighting at the professional level since 2012. The fighter fights with Tiger Muay Thai and MMA American Kickboxing Academy. He played boxing until 2016 and has a record of 5-2.

Tai Tuivasa was born on March 16, 1993, in Sydney, Australia. He is among the twelve children born to Tony Tuivada and his wife, Kerry Johnson. His father is of Samoan descent, and his mother of Indigenous Australian (Wiradjuri) descent. Tai started his career as a rugby player and later turned into fighting. Tuivasa stands six feet and two inches tall and weighs 120 kg (265 lb). 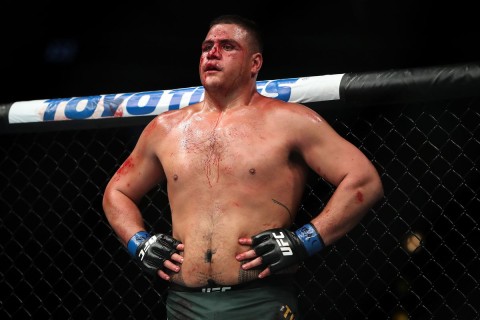 Tai shares a moment after winning his game in UFC 254 SOURCE: Topology

Tai is an active social media user. He keeps posting photos and videos of his training and matches. Following his posts, it seems like Tai is single as of early 2021. The UFC fighter likes to spend his free time with his family and his friends. Recently, He had been to the United Arab Emirates for his vacation.

The journey from Rugby to The UFC

Sydney Native Tai started his career as a rugby player. Sydney Rooster drafted him in the league club in 2010. To everyone's surprise, Tuivasa gave up playing the sport when he developed a gambling addiction. Tai started training for the MMA and made his debut in August 2012.

In 2016, Tuivasa won his first title of The AFC Heavyweight Championship. In early 2017, He made his UFC debut against Rashad Coulter. He won the match and performance of the night prize money. In 2018, Tai lost his first professional MMA match against Junior dos Santos.

Tai fought on UFC 254 against Stefan Struve in October 2020. Tai also defeated Harry Hunsucker in the UFC Vegas 22 event in March 2021. He then fought Greg Hardy and won via TKO at UFC 264.