Victoria Leaonardo Mason, "Fury" is an Amrican Mixed Martial Arts (MMA) fighter who is signed to the Ultimate Fighting Championship (UFC) under the the Flyweight division. Turned professional in 2018, she previously competed at LFA, Invicta FC, Gulf Coast MMA, and Bellator.

How Much Is Victoria Leonardo's Net Worth In 2021?

Most UFC fighters are paid both a guaranteed amount and a win bonus. Further there is UFC Bonuses for Performance and Fight of the Night. Outside the ring, the fighter has sponsorships and endorsements are also a huge source of earning.

Not to mention, the UFC has signed  a $70 million 6 year deal with Reebok which give the brand exclusive rights to fighter’s branding inside the ring. Any UFC fighter earns $2,500 who has 1 to 5 fighter and the number increase with number of the UFC career fight and popularity.

Leonardo on her UFC debut at UFC on ESPN: Chiesa vs. Magny, she made $12,000 of guranteed payout and promotional bonous of $3,500.

Besides, she is sponsored by Thorne, Oura, Vital Performance, and Talking Sports. As of 2021, her net worth is $0.1 million.

The answer is Yes. Victoria Leonardo is married to Brent Mason who is an accomplished Brazilian Jiu Jitsu practitioner. The couple owns and operates Elite Combat Academy.

Though there is no exact details on their wedding or any other personal information, Mason often get featured by his wifey on IG. 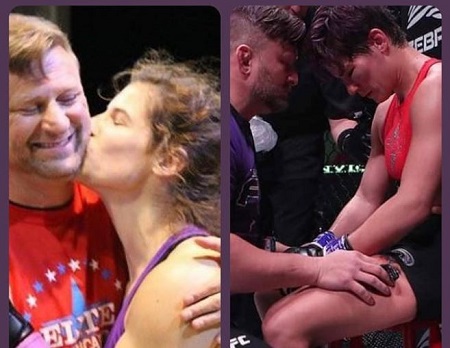 Abouve picture is from Leonardo's IG post in which she has described her married life. She wrote, " On the left: My third amateur fight. Third finish in a row. The very first time he cornered me. We were just dating. On the right: Not my shining moment. A tough, devastating loss but he was there right beside me through it all. I’m beyond blessed and grateful that God has put this man in my life. My husband & head coach. He is there with me to celebrate the victories and to pick me up in defeat. And I will continue to be there for him to do the same!"

In high school, Leonardo studied Italian which helped her discover her love for foreign languages. Later, she switched to Spanish for her field of study in college.

At the Louisiana State University in Shreveport, she was one of the last students to major in a foreign language prior to the program was discontinued. With her degree, she teaches Spanish at Calvary Baptist Academy.

On 25th May 2018, Victoria Leonardo made her professional fighting debut at LFA 40 where he she defetaed Hailey Cowan via submission. Following one more win at LFA, she challenged Miranda Maverick at Invicta FC 31: Jandiroba vs. Morandin but lost vua armbar submission on 1st September 2018.

Rebouding from lost, she had series of three wins over Monica Medina at Gulf Coast MMA 2, Jamie Milanowski at Invicta FC 34: Porto vs. Gonzalez, and Malin Hermansson at Bellator 218.

On August 9, 2019, she defeated Stephanie Geltmacher at Invicta FC 36  via unanimous decision. On February 7, 2020, Leonardo challenged Erin Blanchfield at Invicta FC 39 where she got dropped with a head kick, getting stopped by stoppage in round two.

On 17th September 2020, Leonardo faced Liz Tracy at Invicta FC 42: Cummins vs. Zappitella. She won the fight via unanimous decision.

On 17th November 2020, Leonardo competed at Dana White's Contender Series 36 where she defetaed Chelsea Hackett for an UFC contract.

On 20th January 2021, she made her UFC debut at UFC on ESPN: Chiesa vs. Magny where she was defetaed by Manon Fiorot via TKO. She is scheduled to face Melissa Gatto on August 7, 2021 at UFC 265.